Welcome to Han Mi Korean Restaurant, in the mean time I opted this one as my favorite Korean Restaurant in Hamburg. This is the place where I love to bring people who wants to eat good & authentic Korean food. I've brought my cousin, my brother, visiting friends, colleagues to this restaurant and every time we were satisfied and went out with full tummies and happy faces.


The restaurant is clean, spacey and furnished to be functional. The hallway is decorated with real size Korean gochujang/doenjang jars and I like these small details, which make feel you step into the world of Korean Drama "Dae Jang Gum". Once in early spring, they even prepare pots of cherry twigs which started to budding and gives such an east Asian atmosphere to the dining room. The young Korean waitress are not very chatty and exceptionally friendly but they function and work hard to run to the kitchen for extra order of kim chi and other ban chans. Be warned though that the chef took his sweet time to cook and because they often have full house, which meant 20 minutes of waiting time should be included to your dinner time.


My constant companion for my every Korean meal, a bottle of makgeolli "fermented rice wine". After the K-Drama Cinderalla Sister, everywhere we went my K-Drama addict cousin, Lei and me always order makgeolli, we both like it, taste sweet, mildly alcoholic and there's a distinct taste of fermentation. I love that they serve their Makgeolli in such a pretty cup, makes the whole drinking process more lady like. 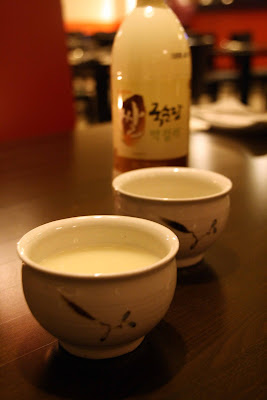 The Ban Chan ... Like in every respectable Korean Restaurant: no charge on ban chan and it's free refill for everything. Their Kim Chi is very good; fresh, right mixture of sourness & saltniness and I loveee the deep fried aubergine ... you see the golden thingy in the right corner? that's the goodies, It was crisp in the outside and so soft and pillowy inside. It's deep fried without being oily and with just a hint of soy sauce, I can only eat this thing the whole night. I ask the waitress to give me refill all the time and I can still eat more of them. 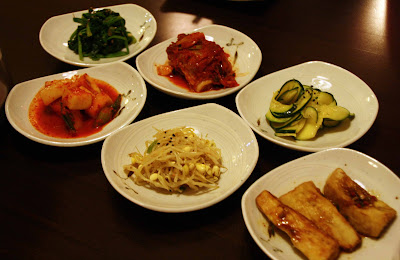 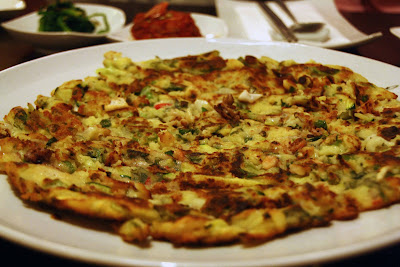 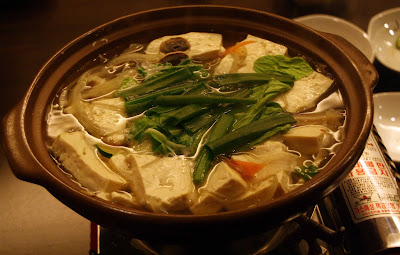 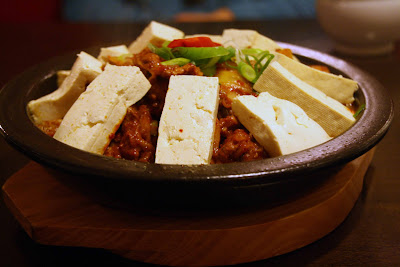 What is a Korean meal without the barbeque : we opted for a mixture of samgyeopsal and beef
look at the marbling of the beef ... makes a very buttery and tender grilled beef 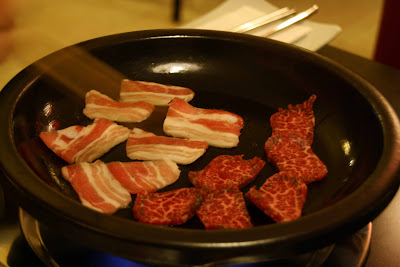 to compensate such a orgie of meat ... here is the bed of salad 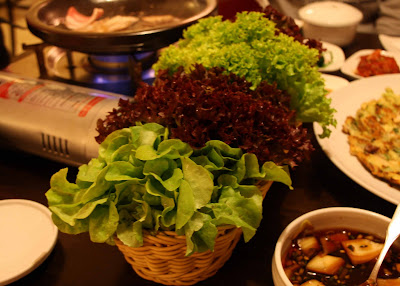 A serving of their L.A. Galbi ... a sweetish and charred beef rips ... my hubby wolf down more
than half of this goodies and wanted to lick the plate clean 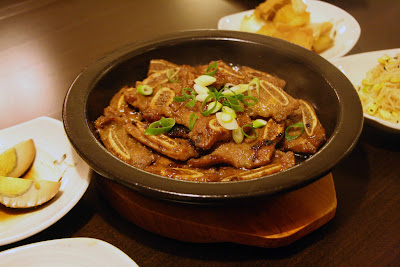 I save the best for the last, here's my favourite Jigae : Sundubu Jigae (Soft tofu stew with seafood and an egg) ... It came to the table, piping hot and still bubbling, spicy, tons of sea food combined with soft tofu and the surprise is when you got a set egg in the bottom of the bowl. After you tried Han Mi Jigae I can surely say other Sundubu Jigae pale in comparison. At least that happens with me. So please folks, Order this baby and I hope you will also find this jigaee is their champion. 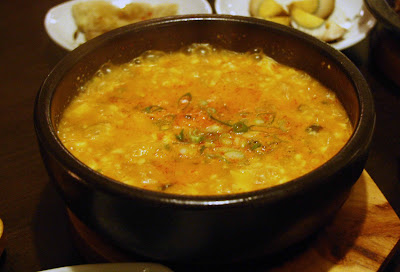 The meals in han mi are always very good and you can see that many Koreans also patron this restaurant. They are surely not cheap but acceptable, a meal range around 10 - 20 Euro. But the meals are always satisfactory and I will always come back and I will gladly recommend this one to others.

Email ThisBlogThis!Share to TwitterShare to FacebookShare to Pinterest
Labels: Eating out (Hamburg), Korean

I'm so excited! I found a real Chinese breakfast in Hamburg and it's WARM!! I exclaim on warm because we Asian like to eat warm meals three times daily. All my German friends are shocked when they hear about this. But trust me, my mom can't even imagine getting into bed without warm meal in the tummy.

Anyway back to my breakfast. Traditionally, Chinese breakfast consists of a bowl of warm soy bean milk (dou jiang) and a stick of cruller / Chinese Doughnut / You Tiao (it is pretty much deep fried dough, sorta like the Spanish Churro). Trust me the combination of oily and crunchy deep fried dough with the sweet and milky soy bean milk is a match made in heaven. 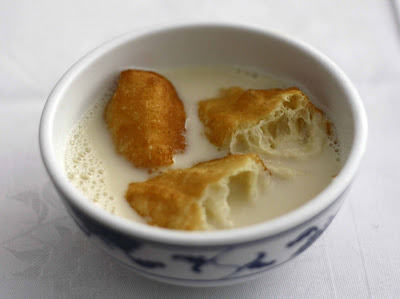 Accompanying the you tiao and dou jiang is a veggie and mushroom bao. The bao are doughy but plump and quite good. The filling is also well executed. 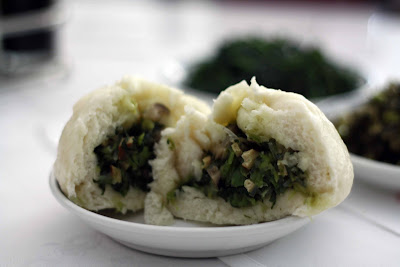 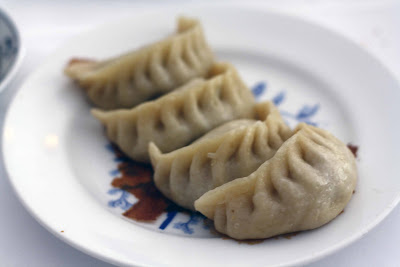 the stuffings of the guo tie 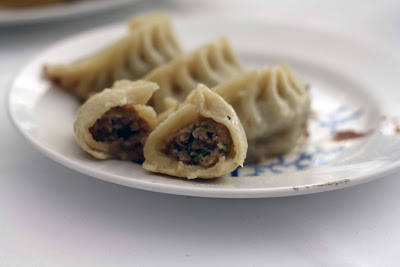 The best part of the breakfast is these side dishes:

liang ban wan nian qing 萬年青, it's actually a type of veggie that tastes a lot like spinach. All my family members love this veggie. It feels good to munch on something green after all that dough. 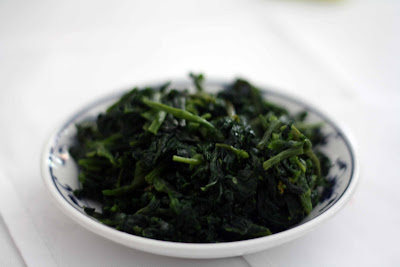 xue cai mao dou 雪菜毛豆
Edamame and some salty greens. An all time favourite. The nuttines of the edamame with the  salty greens made an awesome combination. On top of that, each of these little saucers side dishes costs only 1 euro. 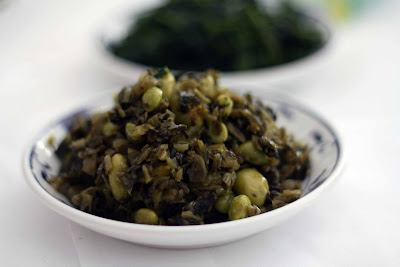 Zhong you bing : The green scallion pancake. It's alright but definitely not the best out there. 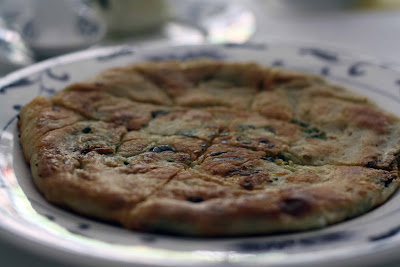 To conclude this post. Zhong hua is a great place to eat some authentic Chinese breakfast. Their pot stickers and green scallion pancake probably aren't the best, but the crullers and the soy milk are very good. And they're fairly decent priced! The crullers cost only 1 euro and the soy milk cost only 1,50 euro. It's dirt cheap! And they totally won me over with the very well done side dishes. Moreover there are other stuff in the menu which sounds interesting like the salty soy milk and the knife-cut noodles.  I'll definitely be going back very soon. If you see me in the restaurant. Don't forget to say hello to me.

Happy New Year 2012!!!
Hubby, me and a bunch of other friends were invited to an old and new party by Pangky and Nuke with their little boy. And boy did I have a good time! Their home are so comfy and neat. Both of them were such gracious hosts. They made sure that everyone had more than enough food on their plates, brewed coffee for those who need coffee to stay awake till midnight, greeted and made sure that everyone had a good time. Nuke is such a gifted cook. She cooked Indonesian food with so much love and spices. Her food will make every oversea Indonesians cry with tears of happiness.
It was decided that the party was to be a Pot-Luck. But, Nuke herself prepared 4 different dishes all by herself! Just like any other party hosted by Indonesians, the food were in abundance. When I say abundance, I meant abundance. There were about 30 people attending the party and by the end of the night, there were still so many food left that all the guests were able to take back some leftovers home!
And here is our feast for the night. 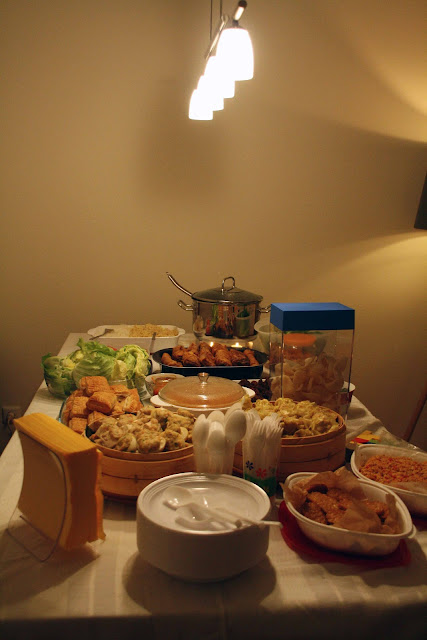 The table from another angle 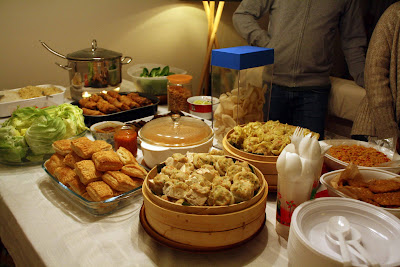 Nuke's homemade siomay. They're filled with shrimps and chicken and typically eaten with spicy peanut sauce. They were so good that I gobbled two portion. 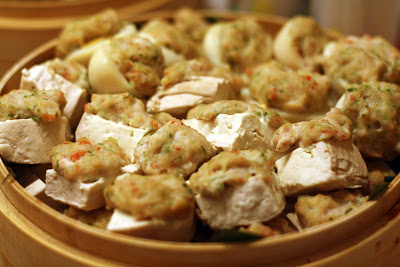 Nuke's home made Indonesian meat balls a.k.a Bakso. They're so bouncy and springy and beefy, just like if  you ordered it from "Bakso Stall in Jakarta" 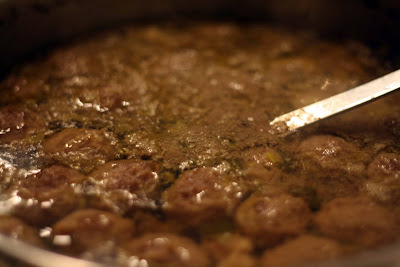 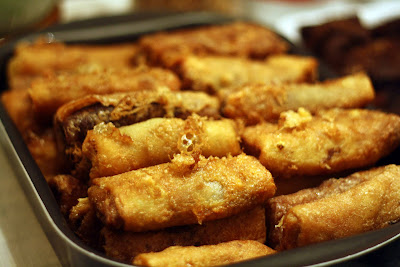 Nuke's Tuna Puff Pastry. This was left almost untouched. Everyone is concentrating on other yummy treats. 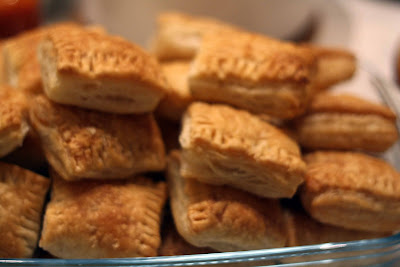 My contribution for the night:
Beef empal with fresh veggies and sambal 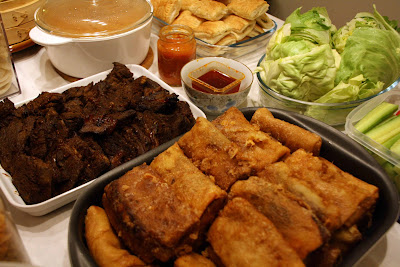 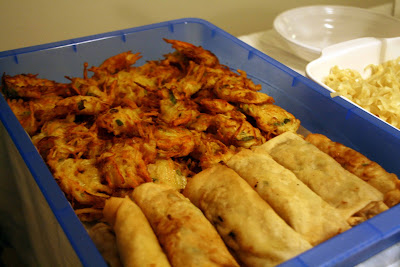 Maria Angelina's Venezuelan Pan de Jamon
Yes, it is the same bread she made for the Christmas goose dinner.
Andi's Cassava Dessert
Sweet gooey white cassava with some coconut milk 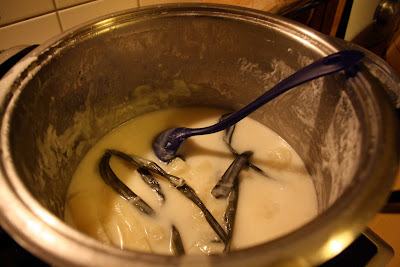 There were more food than those listed above, I just sorta got lost in the food once I started eating. For the sake of completion here is the list of the food:
So that's how I spent my last night of 2011 and the first day of 2012: in abundance of food. I hope that it's a sign for more good food I'm gonna get in 2012.
Have a good upcoming year everyone!
Posted by Mel Chan at 19:51 1 comment: