I've blogged about Zhong Hua a little while ago and I promised that I will go back for some of their other dishes. So I did! I wonder if it's ok to blog about the same place twice. But hey, there are some new dishes that might interest you. I did took some pictures already so why not put them on.

Zhong Hua is actually not a restaurant specializing in authentic Chinese dishes. They are actually a typical Germanized Chinese Restaurant. They offer Buffet the whole day. I've taken a look at their buffet offering. They were the standard deep fried stuff with some reddish sweet and sour sauce. Definitely not my cup of tea.

They only offer and prepare Chinese Breakfast every Saturday and Sunday. And as breakfast should be, they stop taking order after 2 pm. So for those who wanted these yummy stuff, wake up early! well, not so early I mean you can still come at 11 am, like I always do.

As I've promised on my previous post. I ordered the salty soy milk. 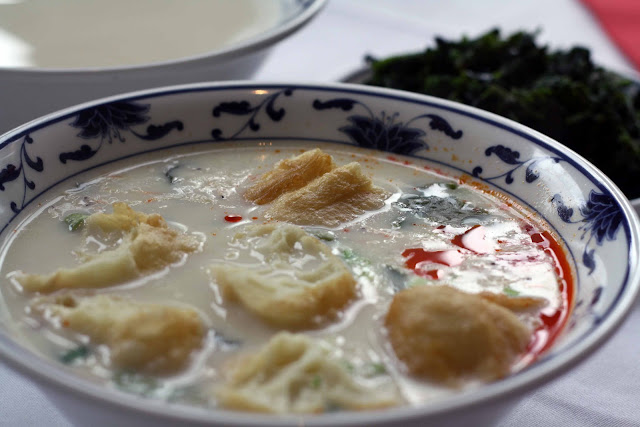 Different than the sweet soy milk, the deep fried crullers are already cut into bite size and mixed into the soy milk. Accompanying the crullers are sea weed, small shrimps and chili oil. Hubby's comment are "hey, this taste nice." After a moment of thinking, exclaimed: "Similar to the Japanese soup!" My reactions were: "Hey it's two different stuff, no similarizing Japs and Chinese Cuisine." But I must say due to the seaweed which is wakame in Japanese. No wonder Hubby thinking that they are the same. 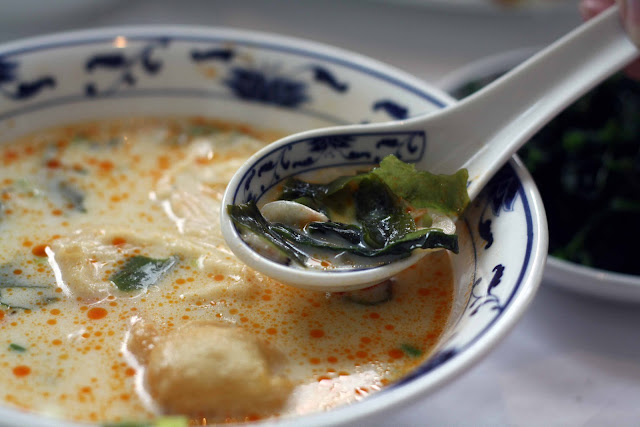 I like them a lot. It's something different than the standard sweet soy milk which I'm accustomed to in south east Asia. But if I must make a choice between these two different variation. I might still prefer the standard sweet one. I blame it on my auto-pilot. People tend to go for the food they eat, during the time they grow up. I think there's a mechanism in human brain, which make food from childhood taste better or more vivid. I will use my Dad's phrase which is "gan qing chi" 感情吃 literally it means sentiment food.

The second stuff we ordered is their Sheng Jian Bao (Pan Fried Bao)
The Baos are alright, plump and doughy, crispy at the bottom. The filling are generous. But I've eaten a lot better home made pan fried bao. 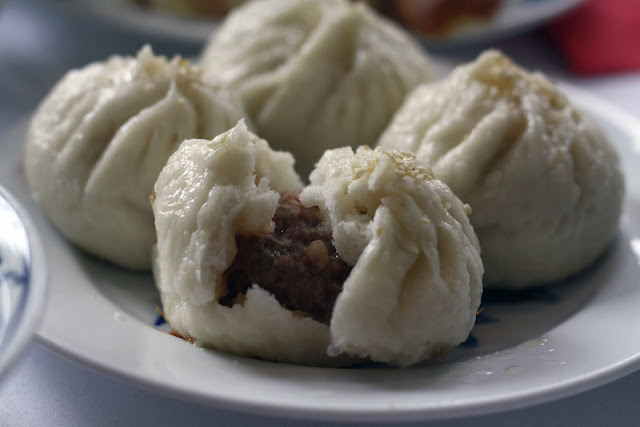 Porridge with century egg and pork
Their porridge are a big dissapointment, of course the century egg is generous and the pork are also alright but the porridge itself is so tasteless that we need to keep pouring soy sauce into the porridge. And I hate dark porridge. I like my porridge to be watery and clear, with a very gingery and peppery after taste. IMHO I think I can make a better porridge than they do. 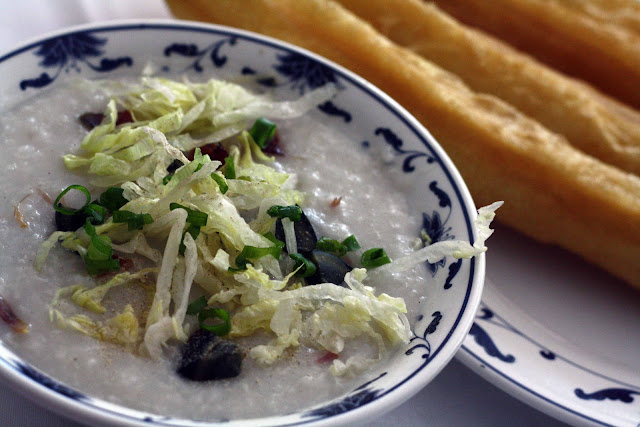 But here is the dish which nail me right away. This is the knife cutted noodles with lamb pieces and tomato. I love this thing right away. The unshapely noodles are course and al dente. The soup are tomatoey and the lamb chunk are so tender and not gamey at all. With some spritz of black vinegar. I can eat the whole portion for me myself and be done with it. 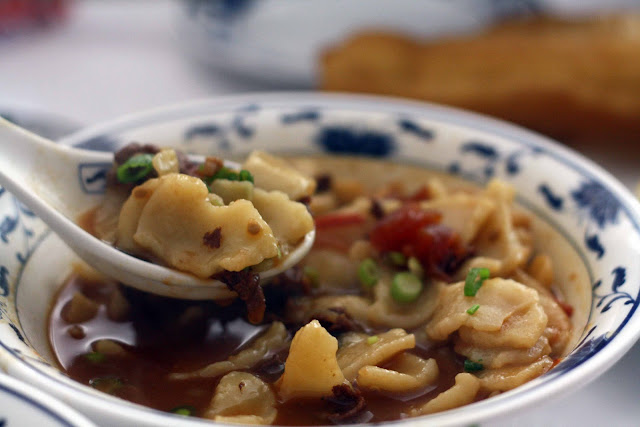 Some of my friends raved about Kim Chi at Heussweg, which according to them made one hell tasty Sundubu Jigaee even better than the one from my favourite Han Mi. So it's been on my to-try-list for a very long time. I've been to Kim Chi for more than once, it just every time I look at their menu, I changed my mind in the last minute and order bbq pork or some other stuffs.

Last week I decided it's time to try the stew for lunch. I came early and officially the restaurant  was not even open yet but the cook which had start preparing some ban chan allowed me to wait in the restaurant. I happily looked around the menu, I always love browsing restaurant's menu, searching for something interesting to try for the next visit.

Then the owner and the waitress came, they greeted me, must be surprised to see a hungry little Asian woman sitting in the corner, anyway without further ado I ordered the stew and in a short 10 minutes the food came. 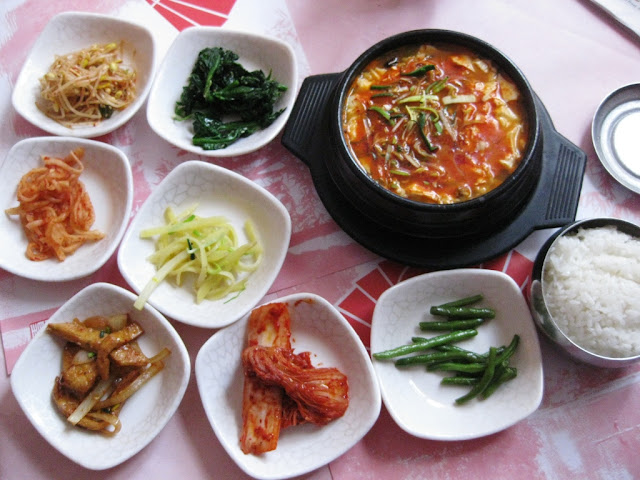 Yummy yummy, I love Korean side dishes, there're so much to try. I was a very happy girl when I saw there're not only 4 or 5 but 7 different side dishes, from top: bean sprout, spinach, radish, potatoes, fish cake, ubiquitous kimchi and lastly green beans. My favourites this time are spicy bean sprout and the sweet and sour radish.

The main attraction is of course the stew. For those unfamiliar with Korean cuisine. Sundubu Jigaee is a soft tofu stew with some seafood, it should be served bubbling hot and while bubbling an egg is cracked into the soup, resulting in a soft and silky pouched egg. Hot and spicy, along with some seafood there're soft tofu which just melt in the mouth. 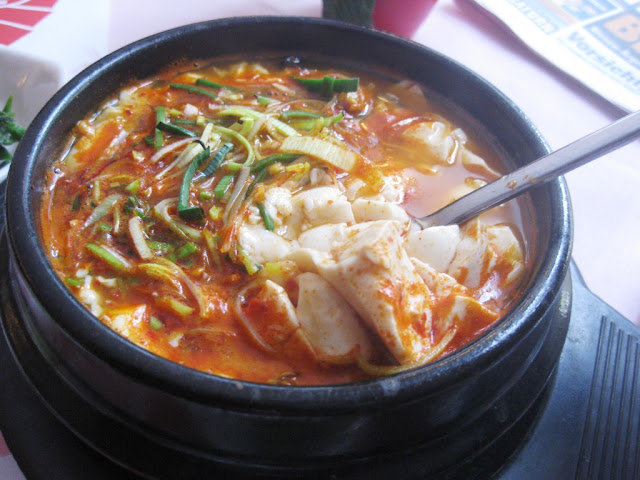 and here is one with the treasure, the yolk 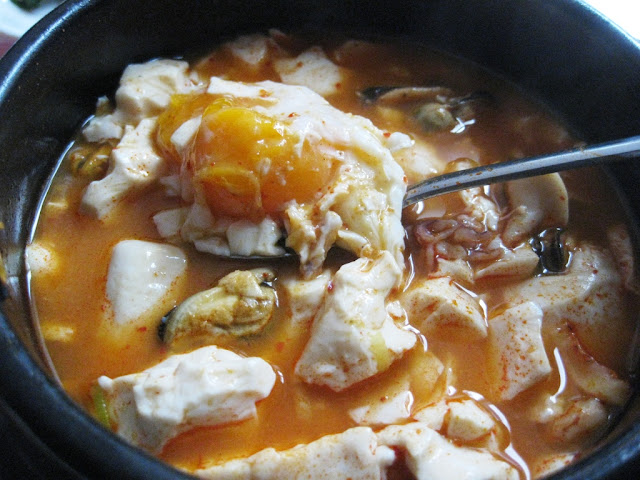 I must say the best part of the meal is actually the ban chan (side dishes). The stew itself is alright, spicy and hot, but it's definitely some frozen sea food. I don't mind frozen one, I mean we are in Germany and not in Korea or some island with stock of endless fresh seafood. but still there are only countable tiny pieces of shrimps, squid and mussels. The rest are chunks of tofu.

It was still a good meal, it just I came with an extremely high expectation and expected something which will blow my mind off. In the end I was happy with the side dishes but the stew didn't impress me.