The idea behind Signora Maria is new and interesting. It's a combination of a delicatessen and a bistro/cafe at the same time. And since it's located right behind the ulmer Münster (Cathedral), so the location is quite central and well chosen. The store is divided into some sections; On one side, there are shelves filled with wine, balsamic acid, proscuttio and basically everything an Italian delicatessen would offer. In the middle of the store, there's a counter which sell cheese, antipasti, cold cuts and dessert. The final side offers warm dishes, such as pasta, and cold bread. And of course beside the warm dish counter, they also have a coffee bar, just like any decent Italian restaurant.

The first thing I noticed right after I entered the shop/restaurant, was that there are no picture or sign! This kinda turned me off actually. Why would they not put a sign? Did they think this shop/deli idea is so original, that they are afraid that their idea will be stolen? I have no idea. Anyway, despite that, I was still curious about this place and ordered some food. This process was also quite complicated. They don't have a clearly laid out menu, instead the menu are pastered either on the counter or over the counter. After that you need to walk to the register to place and pay your order, then with the receipt, you have to walk back to the cooking counter and gave it to the cook. It's definitely not a place for you if you want to sit leisurely and be waited on. Anyway, this is what I order :

Spaghetti with clams and mussels 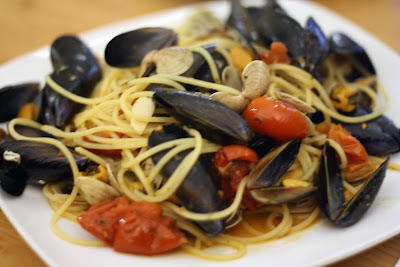 It was alright, the spaghetti was a little bit undercooked, I guess they tried to make it al-dente but it's definitely undercooked. There was a lot of clams and mussels for a dish that cost around 8 euro. And just like spaghetti vongole should be, this is a very garlicky dish. And I love the cherry tomatoes which bring a little fruitiness and sweetness to the dish.
For the dessert I ordered a chocolate profiteroles: 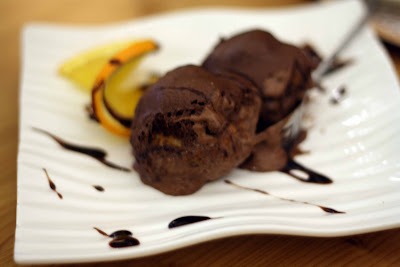 The first impression that I got, is that they don't prepare the dessert in the store. Like I said, it's a delicatessen and they have variety of cakes which they sell in boxes. I really think that they open the packaging and then sell it as theirs. But I also saw some tiramisu and profiteroles in casserole forms. So maybe these two desserts are freshly made. The Profiteroles itself is cold and chocolaty. Good but clearly not the best. and for the companion of the profiteroles, I ordered some Latte Machiatto 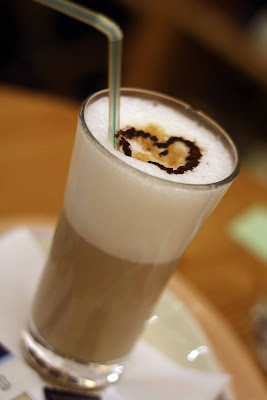 I like that cocoa heart on top of the milk foam. The coffee is thick, hearty and milky, just like a good Italian coffee should be.

It was a mission for me to get permission to get the pictures of the food I ordered. Seriously. After I ordered my food, I asked for permission to take pictures of my food, and only of the things that I ordered, not the store itself. They were not pleased, but after explaining that it's for a blog, they were willing to ask around. First they asked the supervisor, then the store owner. I was surprised when they pointed me to a middle-aged Italian man, quite heavily build, who sat on one corner, drinking coffee while writing on a notebook. He looked just like a Don from a mafia movie (I watched too much "The Godfather", I know). Anyway, after a discussion, He told the supervisor to give me his permission to take pictures, but only after I gave them my blog address.
So my final verdict is this: the store impress me a lot, they have a variety of goods; Olive oil, balsamic acid, Italian bread, pastas, antipasti, cold cuts, and frozen goods. The warm dish itself was fine but not the best Italian food I've eaten. But, I will definitely go back for their authentic Italian goods.

Email ThisBlogThis!Share to TwitterShare to FacebookShare to Pinterest
Labels: Eating Out (Ulm), Italian