I just learned that Sternschanze is the "hip" part of Hamburg. If you are young, cool, chic and probably working in the advertising or fashion industry, chance are this is your turf. Bars and Cafes  littered the roads. Small shops where owner sell hand-made and self selected products. Apple store. You got the Idea?
I passed through KimZen while walking around the area with Linda. I checked their menu and prices, and they're very reasonable, around 5 - 10 euro for a dish. Afterwards, we googled some reviews on the place, and Linda & Co. including me decided to try this place.
The waiter was Korean, but he speaks perfect German. We also saw a Korean Ahjumma cooking in the kitchen. But beware, the Ahjumma took her sweet time to cook. Nevertheless, the menu is impressive. They have Bibimbap, Kimchi Jigaee, Kimbap, Jajang Myun, you name it.  All typical Korean dishes are in the menu. The biggest beef I just have to mention though, is that they charged us for the ban chan. They cost around  1 - 3 € for a plate of Ban Chan. I'm so used to Arirang in Berlin who serve 4 Ban Chans for free. I'm appalled!
Jajangmyun cost around 6 euro. It was a very small portion and it only came with some cucumbers as topping. Not impressive, in fact, eating this only made me crave Tian Fu's Zha Jiang Mian in Berlin. 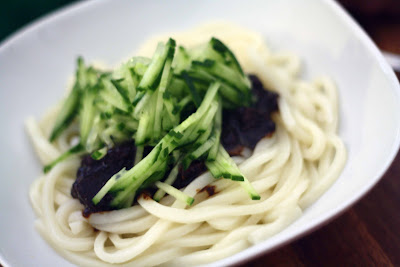 The priciest dish of the day was Bibimbap in hot stone (8 €). Hot Stone?? More like hot ware, which is the same dish they used to serve Kimchi Jigaee. However, the pork slices were tender and flavorful. But it lacked the sunny-side-up egg, which I think is an important part of the dish. 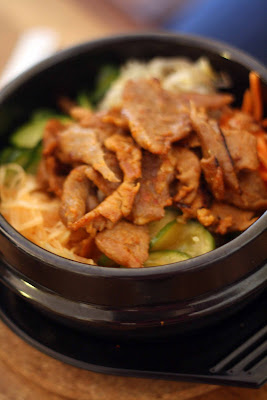 Bulgogi on a plate. IMHO it's the same dish as the bibimbap, just on a plate. 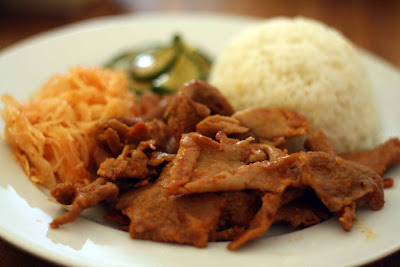 Our Ban Chan: bean sprouts, kim chi, nori and radish. We pay almost 2€ for that nori, and I know for a fact that those nori and the yellow radishes came from store-bought packages. The Kimchi is good, milder than I'm used to, but sour and garlicky regardless. The bean sprout was also adequate. It was crunchy and fresh, but can definitely use more garlic, sesame oil and sesame seeds. 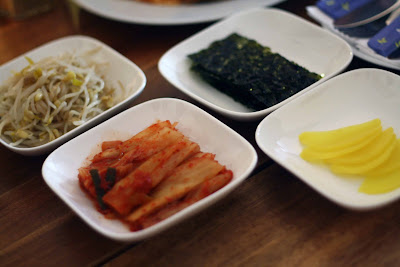 For drinks, they actually offer a very German drinks. No, not beer. They serve peppermint tea that's made with fresh mint. I think it feels like tooth paste. But those of you who loves peppermint will love this. It's a personal preference. 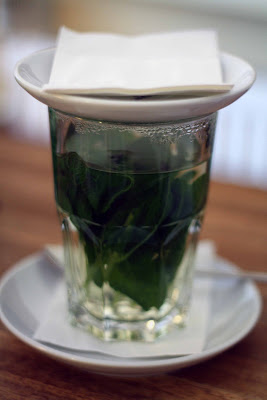 The food they offer in KimZen is pretty authentic, but they have been altered slightly to suit the German taste bud. I'd say KimZen may be suitable for those who aren't familiar with Korean Food or for those who wants to start venturing to this cuisine. Considering their location and price, KimZen is a fairly good choice. They have a relaxing, clean, cafe-like environment. But for a jaded foodie like me, I prefer something that's bolder, and closer to the real Korean food. With that said, KimZen still has a lot of postive reviews in qype, so definitely don't take my word for granted. Try it out yourself, you might find their Korean food satisfying.
KIMZEN
Schulterblatt 58a
20357 Hamburg
U3/S Sternschanze
Posted by Mel Chan at 21:35

Email ThisBlogThis!Share to TwitterShare to FacebookShare to Pinterest
Labels: Eating out (Hamburg), Korean