Honestly saying, the first time I heard about this black bean noodles is from Korean Drama (Shame on my Chinese heritage) I thought Jajangmyeon is a traditional Korean food. Little that I know it's actually an adaptation of northern China speciality. After I taste both Korean and authentic Chinese black bean paste noodle. I must say I prefer the Chinese variation better, it's meatier, the sauce was not thickened with unncessary starch and I can't appreciate the potato in the jajangmyeon. I would say too much starch in a meal.

The Zha Jiang Mian in Tian Fu Food is just right for me. They served home made hand-pulled noodles, for me, the bounciness and the chewiness of noodles is the most important of all. If they got it chewy and bouncy then they got me. The sauce is made with minced pork and salty zha jiang. They also served a lot of veggies like carrot, cucumbar and soybean sprout, the sweet and fresh veggies complement the salty zha jiang very well, and I love the combination of the crunchiness of raw veggies with the soft noodles.

Different than JaJangMyeon, where everything is already topped in a serving bowl. Tian Fu serves the ingredients separately and you need to assembly everything yourself. Which works fine for me because this way you can control how much sauce and veggies do you want in the ball. Hey some people hates raw soybean sprout they said it has some grassy smell. 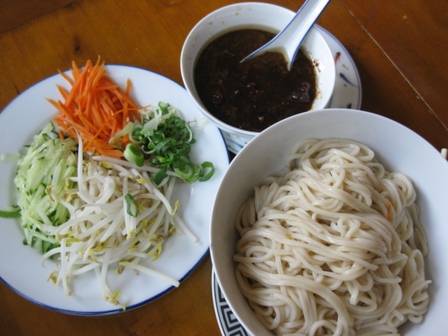 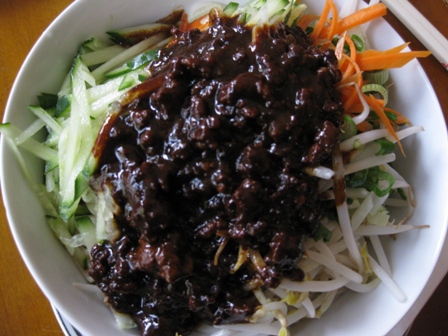 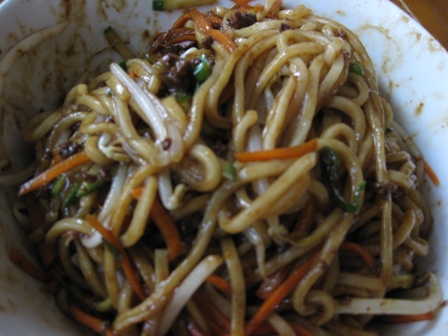 And this after it's been tossed evenly, it might look unappetizing because of the dark colour. But after you try one bite of this chewy and salty noodle. you are surely hooked. I brought my supervisor to this Imbiss and she loved it so much that she keeps coming back. And everytime I visit this Imbiss I saw many Korean Ahjumma and they always order the ZhaJiang Mian. So I guess that It's one of the place that real Korean Ahjumma visit, when they crave for JaJayngmyeon.

Btw, if you are wondering why there're Tian Fu food, Tian Fu Restaurant and Tian Fu Supermarket. Well the explanation is simple, there's only one owner for these three establishments. And if you already take your time to visit Tian Fu Food then you just need to walk next door to shop for some Asian ingredients in the Tian Fu Supermarket. I would suggest to grab some home made egg tart in the counter of Tian Fu Supermarket. They are really one of the best (or better said the only one) in town.