China-Wok is a typical germanized Chinese Imbiss/Restaurant. They call themselves restaurant and of course, you are waited there. But if you ask me the menu is a typical China Imbiss type, filled with deep fried stuff and similar brown sauces, eventhough on the menu stated interesting stuff like, sze chuan sauce, sa cha sauce and even black bean sauce. But don't expect anything than some salty brown soy sauce based sauce.

But again, China-Wok is one of the more decent China Restaurant in Ulm. So here are some stuffs that we order as lunch.

Crispy duck with veggies chop suey in hoi sin sauce (7,90 euro). Hubby loves duck, escpecially deep fried so this is what he ate. It was alright, the rice was succulent and sticky as asian rice should be. The veggies are mixture of canned bamboos shoot, fresh green beans and some pepper bell. It was alright for a germanized Chinese food. 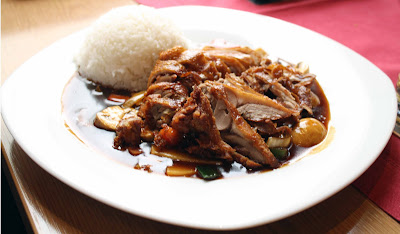 stir fried beef for 6,50 euro, a friend of ours ordered this. I didn't take a bite but he said it was good. 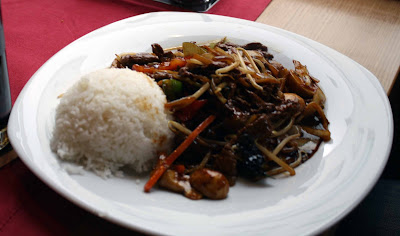 me, being the smarter one, avoided the boring brown sauce and ordered fried rice with shrimps. They don't have this on the menu, they only have fried rice with chicken, beef and shrimps, but they are willing to make a change and stir fried the rice with only shrimps. And surprisingly it was wonderfully good, it was fragrant, has the wok hei (the burnt smell of the wok), and generous serving of medium sized shrimps. It cost 6,20 euro. 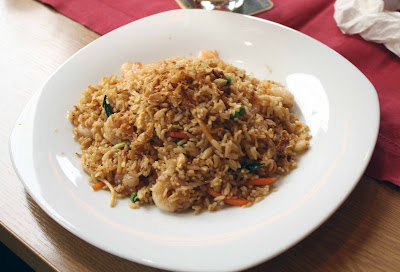 Btw they also offer sushi, after all sushi is all the rage now in Germany. But honestly saying I was afraid of the quality of the raw fishes they offer there. I mean sushi is not only about raw slices of fish with some rice. Sounds simple, but it's about quality, if I eat sushi or sashmi I prefer to know that there's a dependable source of sea food. Otherwise I don't even want to touch it.

Do try the fried rice, it was one of the better one that I got since I've moved here to south germany.

Email ThisBlogThis!Share to TwitterShare to FacebookShare to Pinterest
Labels: chinese, Eating Out (Ulm)