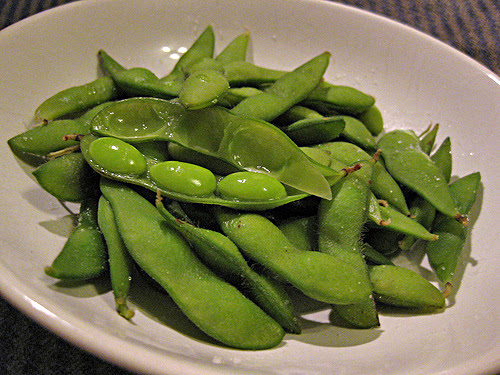 I'm not even sure whether I can even call this a recipe. You basically need to boil the Edamame in salt water and lightly salt them again after that. But I'm still going to give you this recipe anyway because boiled Edamame is so damn tasty! You can get a pack of frozen edamame for a mere €1.80 in Vinh-Loy Asia Markt. And with just one pack, you can serve at least 5 plates of healthy soy beans! Psst a secret, almost all Japanese restaurant in Berlin do serve boiled frozen Edamame from Asian market and they charge you around €3.00 for a plate of teeny weeny edamame appetizers. A friend of mine who work in a small but well established Japanese Restaurant in Zehlendorf told me this.

So forget those high calories potato chips when you want a quick snack. Instead grab on these boiled edamame when you want to munch on something during sport matches :P