Chinese new year or Chun Jie (lit. Spring Festival) marks the beginning of spring. At this time of the year most Chinese family cooks special meals that use expensive ingredients such as shark fins, sea cucumbers and abalones. Furthermore, there are a number of fruits that are served especially for Chinese New Year. These fruits usually have hidden meanings within their names. For example tangerines symbolize happiness and good deeds, pineapple imply prosperous year ahead, apples means peacefulness and many many more.
The root of my family is from Fujian province in southern china, so the cuisine for Chinese new year are also heavily influenced by the province delicatessen. Dishes such as fish maw soup, Luo Han Zai (Buddha's delight), pork with bamboos and shark fin soup are only some which comes to my mind now. However as this year I'm stuck here in Berlin, I need to say good bye to all those intricate dishes.

Luckily a good friend of mine, ZL, who come from Northern China (Dong Bei), which are famous for their dough dishes, invites me to the "reunion dinner". We decide to cook a typical northern specialty, dumplings (Jiao Zi). These Dumplings which resemble old Chinese money called sycee symbolize again prosperity. There's even a custom to hide one piece of coin inside of the dumpling and the person who pick out the one, will be lucky for the rest of the year. The fillings for the tiny pocket is a mixture of ground pork, shrimp, scrambled egg and chive. These little pieces of heaven are so good, that I gobble down more that I can count. Unfortunately, I do not pick out the lucky dumpling as ZL refuses to put coin into it. She says, it's unhygienic! 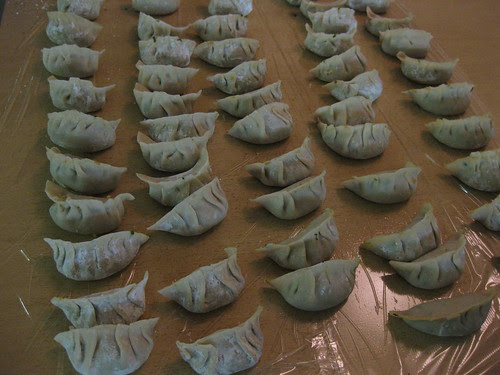 army of dumpling queuing to be boiled 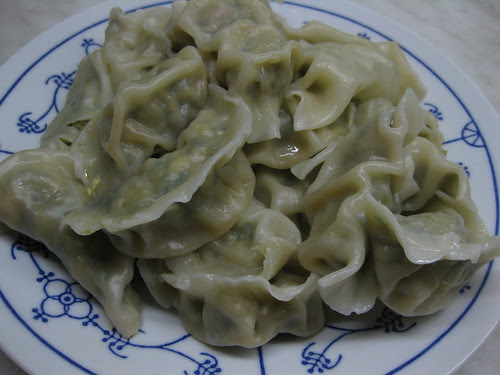 here are the cooked jiao zi, waiting to be dunk into black vinegar and chili oil

mixed all ingredients in a deep bowl and scoop the meat filling with a tablespoon into the dumpling skin. Fold them tightly to prevent leakage while boiling.

And yes we cheated. We bought the dumpling skins from an asian store in Kantstraße 101 called Oriental. One package costs around 2 euro and those paper thin wrapper are enough to wrap all these meat fillings. Btw, if there's some meat fillings leftovers, just mixed in some starch and make meat balls out of them.