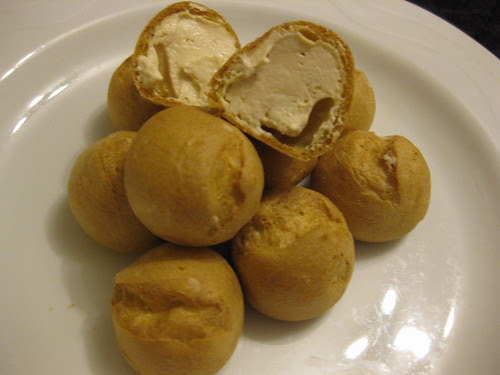 Imagine putting some air into a pouch, then try to bite into said pouch. I bet you taste "nothing" :D.
Sorry for the joke, but that's what the name "Windbeutel" implies. It means "wind pouch", and that's what you're suppose to feel when you bite into a windbeutel - it's light as air. I personally think that's a pretty name for a dessert.

Back in Indonesia, this cake is called "kue sus". I used to wonder, where the hell did this weird name came from? As far as I can tell, sus can means suster(nurse/abbey sister) and I kept wondering, what does a nurse has to do with dessert! Well now I know, It's all about history. Indonesia was colonised for 350 years by Hollands who brought a lot of food and culture into Indonesia and after so many years we just borrowed their foods and words into ours. So guess what is the dutch name for cream puff? Soesje!!! no wonder Indonesians call cream puff "kue sus"

I was never a fan of Indonesian kue sus. It was heavy on vanilla pudding and most of times after one piece I feel bloated. But my mom loves kue sus, so whenever she goes to a cake shop, that's the cake that she will always buy. I never ate them or when necessary I just took one and that's all.

But I love windbeutel, it's all about the cream as the filling. They are light (not in term of calories but in term of consistency) and if they are slightly chilled, it feels like biting into ice cream, yummy! Combined with Baileys Irish cream, they taste even better. For those who doesn't know, Baileys is an Irish whiskey and cream based liqueur.

I would love to give you a recipe for Cream puff with Baileys, but I can't! 'Coz I bought them from the freezer section in the supermarket. So lucky for those of us in Germany! we can buy them in any good supermarket. Those of you, who are not in Germany, keep on drooling!! 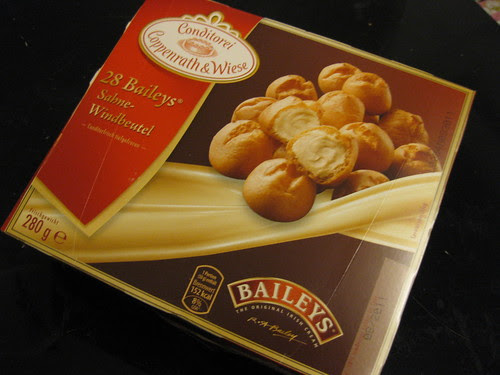 Email ThisBlogThis!Share to TwitterShare to FacebookShare to Pinterest
Labels: Cake and Dessert