My dear cousin, Lei, is a real Korean TV series addict. She watch almost all popular Korean drama. Heck! she even watch other not so popular drama to kill time while on her night shift as a doctor in a hospital. Sorry lei, I just blow out your secret :P. And because of her I start to watch Korean Drama too and I'm hooked. Come on, who doesn't dream of a good looking guy grabbing your hand, pleading you not to leave him? Or about MBC's director, Sunbae, who sings for you at the Karaoke (this one is for my mom, she's a big fan of "all about eve" and he's in pseudo-love with Chang dong gun.)

Anyway, when Lei was here in Berlin months ago, we visited Arirang because she heard me rave about their samgyeopsal. She's very knowledgable about Korean food because of her addiction to the K-drama. So that day I just let her do the ordering and we even started to relate some K-drama food with the one that we ordered. It was really fun, If you are reading this post, girl! you know that I miss you.

As always, the complimentary Banchan for starters/side dishes. That day they serve two types of bean sprouts, pickled cucumbers, caramelised potatoes and of course kimchi (clockwise) 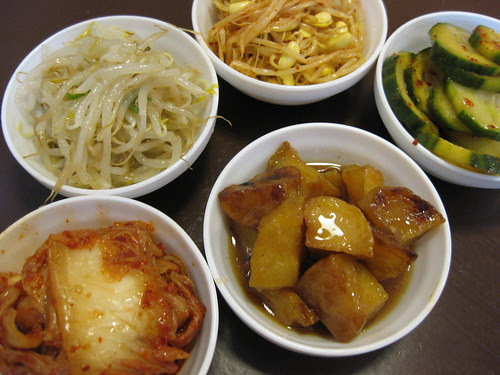 Lei was excited when she read that Arirang serve sea food noodles. She told me that this dish is featured in a K-Drama called Gourmet (I hope, I remembered it correctly) and in this drama, the Jambong looked so appetizing with lots of sea food and the soup are prepared carefully for hours.

Our Zambong was definitely not made with the freshest sea food but more like teeny weeny pieces of octopus, shrimps and veggies. But their house-made noodle was excellent, it was cooked al dente and had a bounce that no dried noodles can imitate.
Zambong 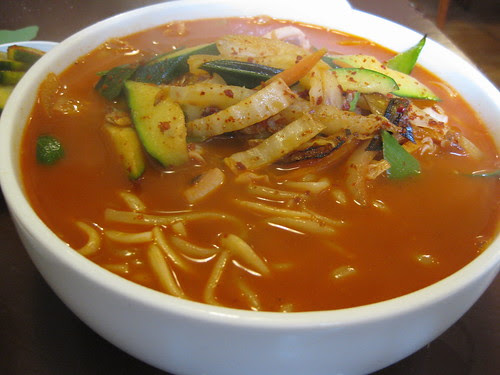 This dish is featured in the "1st shop of coffee prince", Eun Chan(the heroine)'s sister wanted to pan fry this pancake but she messed most of it and the tall cool guy who used to make waffle in the coffee shop helped her with this task. Yeah I know, I'm also an addict.

The scallions seafood pancake was again made with a little bit sea food, but it was deep fried with a lot of scallions so we could accept it and say that we liked it.
Haemulpa-Jeon 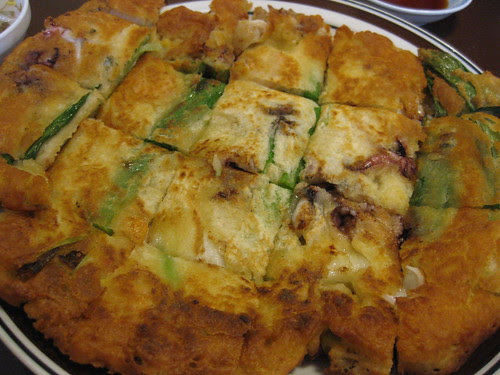 The third dish was the simple Kimchi Jigae, there's no relation with any K-dramas, we simply wanted to taste Kimchi soup here
Kimchi-Jigae 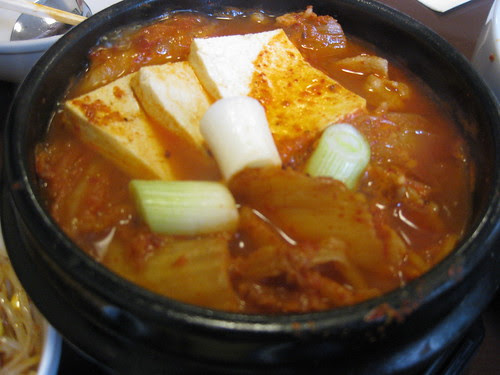 Here is the Tangsuyuk, which was actually, deep fried pork pieces in sweet and sour sauce. It was great on the first bite, but after some time, we felt bloated from the deep fried batter and there were really more batter than pork.
Tangsuyuk 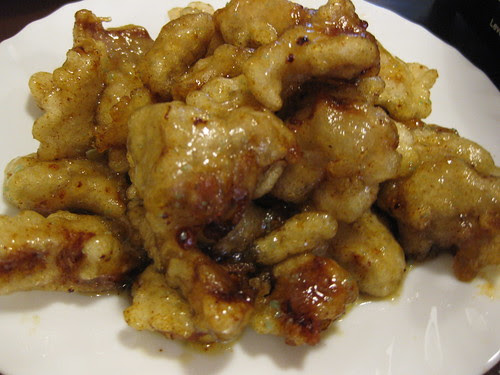 This Kimchi Jeongol was served on a pot with portable stove underneath to keep it warm. The taste was actually similar to kimchi soup. The ingredients were also similar, there's tofu, kimchi and pork but because of the ramyun, I prefer this dish more than the Kimchi soup.
Kimchi-Jeongol 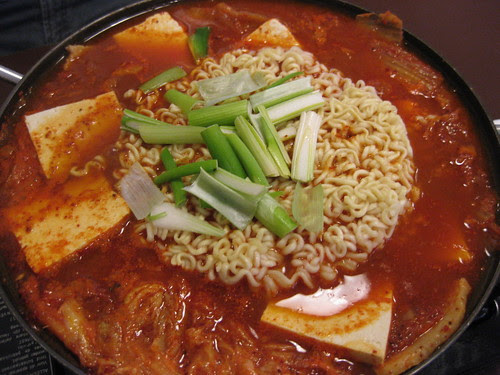 Osinger-Deopbap
And here is the spicy octopus on rice, which I ate alone on another day, As you can see. I forgot to bring my camera and this photo was taken with a mobile phone camera. 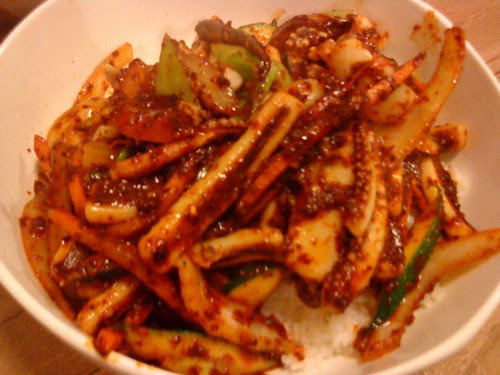 In general, the food in Arirang is satisfactory, authentic and pretty good for their price. The only thing that bother me is the cleanliness of the restaurant (it's kinda dirty) and the smoke which came out from the next table's samgyeopsal. Because of neighbour's complaint they are not allowed to open the window to circulate the air, so the whole restaurant is smoky and trust me, the smell lingers longer on my clothes than I wanted them to be.

Email ThisBlogThis!Share to TwitterShare to FacebookShare to Pinterest
Labels: Eating out (Berlin), Korean