Are you a coffee addict? Well I am! I can't function well if I don't drink a shot of coffee. Like a hungry beggar, I'll even drink the beverage my college's cafetarias try to pass as "coffee". In TU-Berlin, that's the grad school I'm attending now, there are several cafetarias. And Studentenwerk Cafetaria in our main building have the best coffee. For a mere 35 cent you got filtered coffee that are brewed by a super automatic machine from wmf. The coffee taste alright if you add lots of milk but don't expect more than what you pay for.

IMHO, the worst coffee is the one served in the cafeteria in the Mathematics' building. For 40 cent you got drip-brewed coffee in a teeny weeny plastic cup. And because of the tiny cup, there's simply no space for milk. Actually, now that I think about it I'm not sure which one is worse, the one in the math's building or the one in the main library. Yuck! don't even get me started. I shudder at the thought of those black-potion-in-a-plastic-cup. But woe me, I have to drink those sour and bitter liquid for the their caffeine to keep me awake and concentrated.

After years of suffering from those horrible "coffee", I'm glad to share the news that a trained barista has recently opened a mobile coffee shop directly in front of TU Berlin's main building. I'm not kidding! An experienced barista who can actually brew espressos!! He told me that he used to work in an Italian restaurant but they kicked him out. So he didn't have any choice but to open up his own business. Back in Italy, he was trained as a barista, and that's how he got the idea to make a mobile coffee shop. 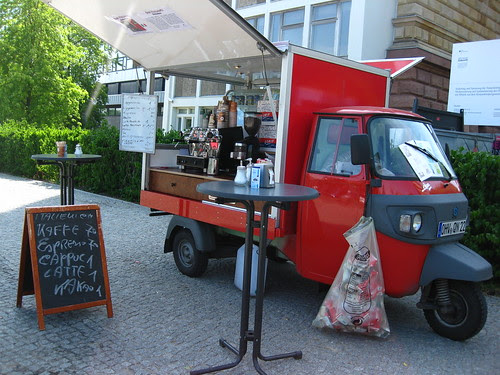 I ordered a Latte Macchiato yesterday morning and it was directly brewed in front of my eyes. After all those sappy coffees, this freshly brewed latte macchiato was heaven. It was full of that intense flavor that's real coffee. It's dark and concentrated with a little bit of brownish oil on the surface. Combined with the milky foam, the coffee tasted mildly sweet and smooth. Okay you need to pay 1 euro for a cup, which means 60 cent more than that disgusting stuff which is called as Kaffee by those people in the math building's cafetaria. But still that cup will cost you 3,50 euro in other coffeehouse. So it still is a bargain!

Here is the interior of the cute espresso bar 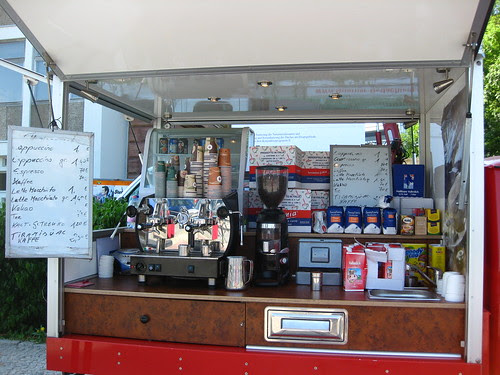 Email ThisBlogThis!Share to TwitterShare to FacebookShare to Pinterest
Labels: Eating out (Berlin)